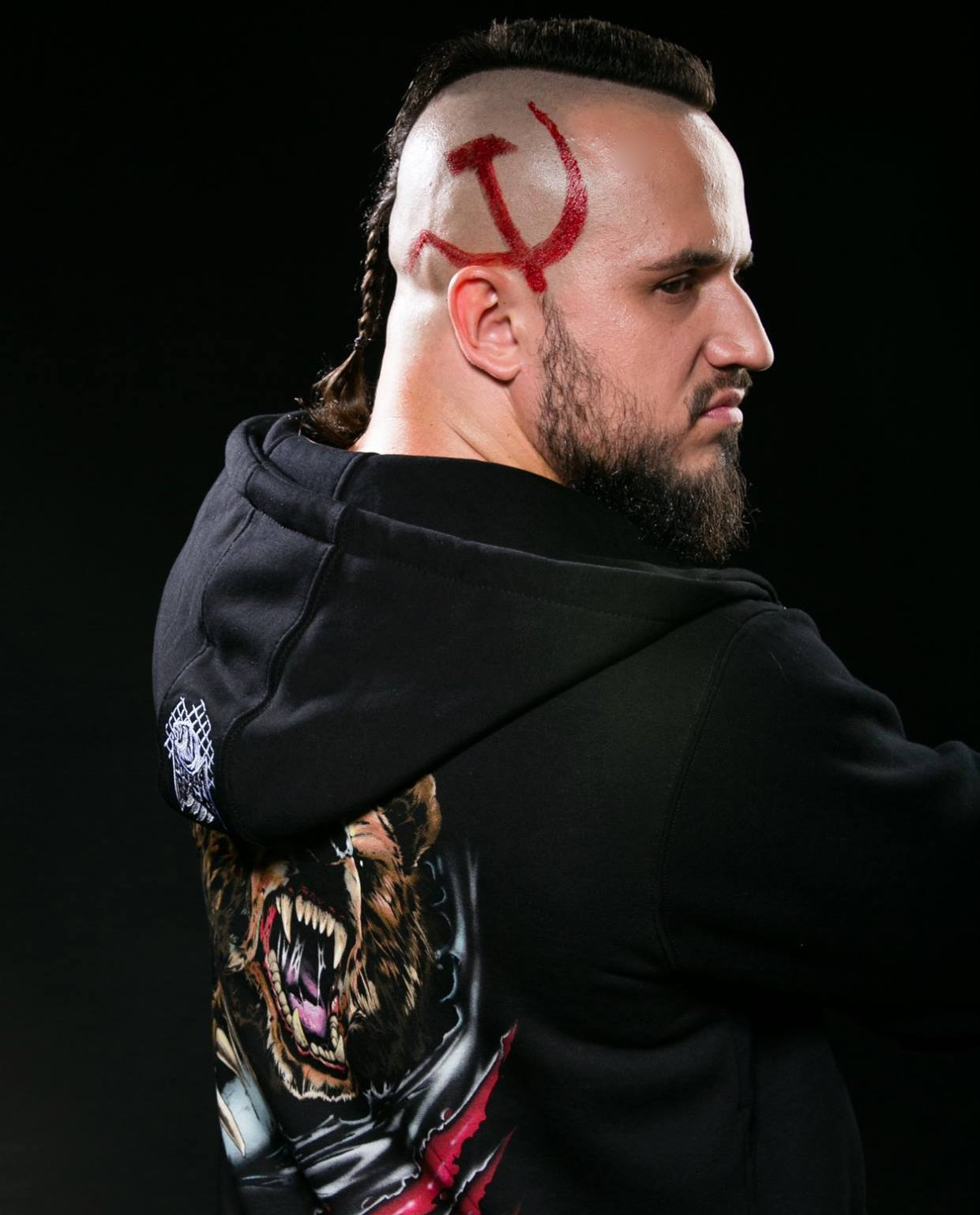 The wrestler with a real Russian accent and a unique hammer and sickle symbol haircut on the side of his head, Pavel is professional wrestling’s famous, truly authentic Russian character.  Talented and charismatic, trained in fighting and martial arts, and devoted to his sport and his fans, Pavel has a life-long, indomitable fighting spirit that has propelled him – against all the odds – from obscurity in Russia to the world of sports and entertainment in America.

Born and raised in Moscow in a family of math professors (both his mother and father were professors), Pavel was not expected to have a huge love for sports.  But even when he was just a child, playing with action figures, he was always imagining himself a superhero.  One day, when he was about 14 years old, his mother called to him from another room, “look what’s on TV.”  It was a WWF show and Pavel saw pro wrestling for the first time.  He was mesmerized.  There were big men fighting, using chairs, jumping through the tables.  Something clicked in his head and told him that this is what he wants to do in life!  It was a defining moment.  He loved all the wrestlers’ bright entrances, the huge characters, the story telling, and of course, the fighting.

Professional wrestling was not developed in Russia.  People didn’t understand it, and there were no schools where you could learn it.  What was shown on TV were only 45-minute versions, aired very late at night and just once a week.  But Pavel made sure to record each one – with VHS tapes – and then he would rewatch them, over and over, hundreds of times.

He started working out, and going to self-defense training classes after school.  At first he was training in karate and sambo by himself, buying books and practicing at home.  At the age of 17 he started training and fighting in kickboxing with the Moscow Federation of Kickboxing.  By the age of 18, while he was studying in the University, pursuing a degree in Journalism, he began fighting in the fight clubs to earn extra money.

Although Pavel was into sambo and kickboxing, his love for professional wrestling was growing from year to year.  For Pavel, pro wrestling had what the other sports lacked:  it had story telling and over-the-top characters in addition to the fighting.  He finally decided that wrestling was what he really wanted to do – but he realized there was only one way to become a pro wrestler, and that was to move to the USA.

Pavel was used to fighting.  He had a strong, aggressive style, but now he was facing the toughest challenge of his life – to leave everything behind in Russia and go to an unknown future in America.  He had already lost his father, who died when Pavel was just 13, and now he would be leaving his mom.  Although the separation would be painful, his mom supported her son’s decision, as she wanted Pavel to pursue his dreams wherever they might lead.

If he went to America, there would be no relatives and no friends there to help him.  And although he was learning languages at school in Russia, his English was barely fluent.  He would also be leaving before completing his final year of study at the University, where he was pursuing a career on Russian TV as a journalist.  Nonetheless, Pavel was determined.  His fighting spirit was driving him in pursuit his dream. 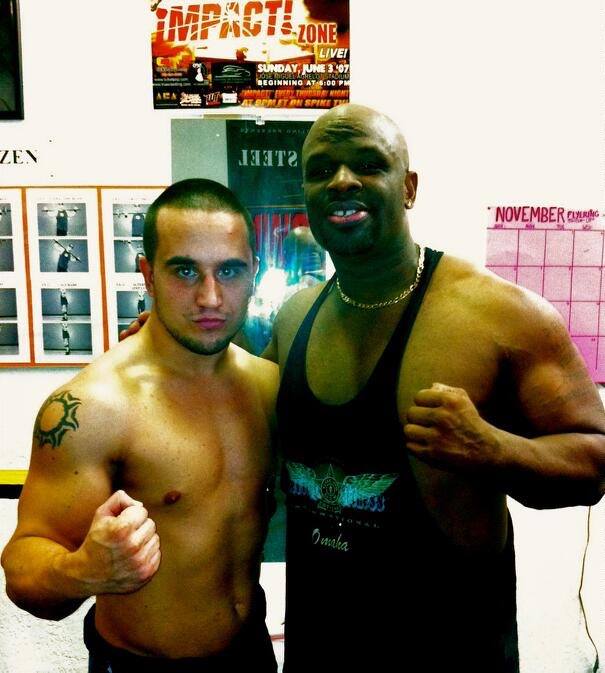 With the trainer Devon Dudley, 2012 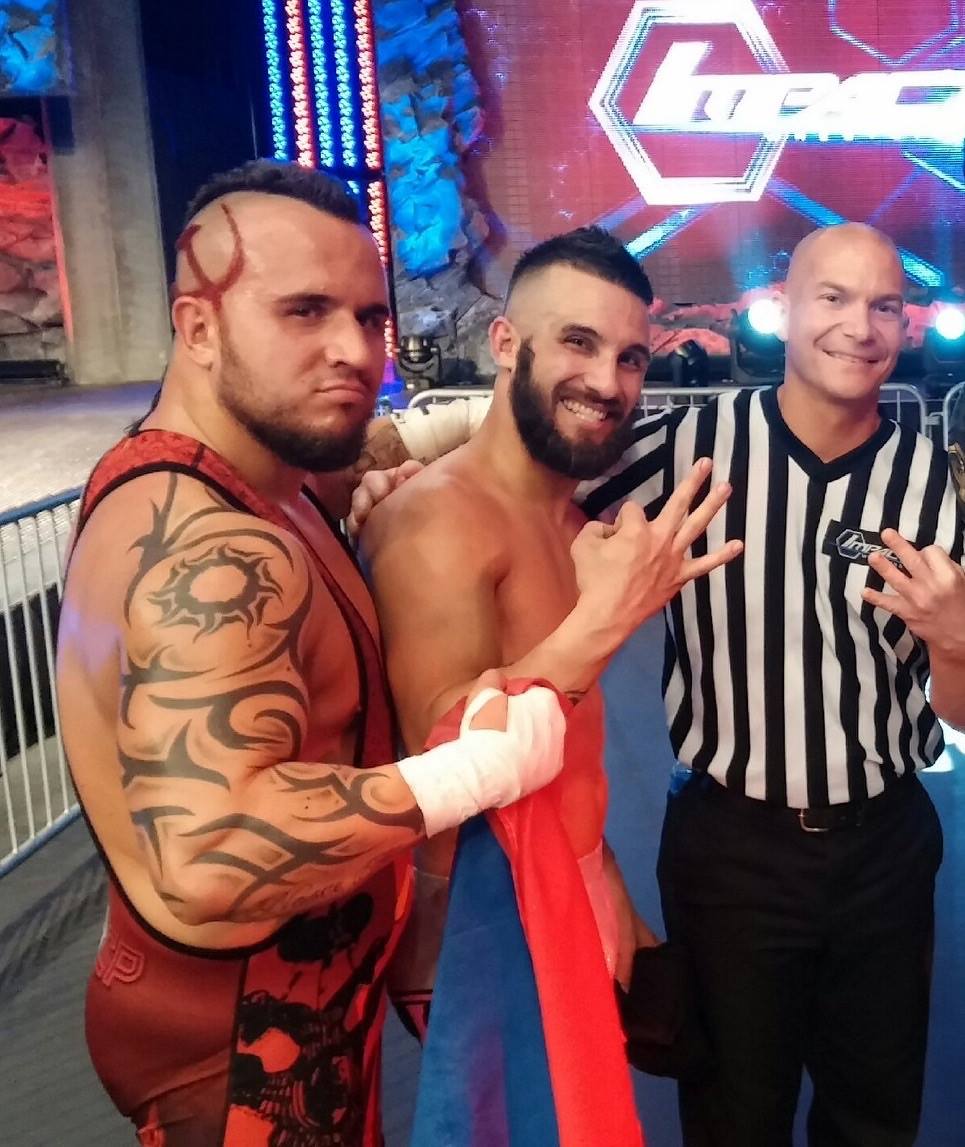 He searched the Internet and learned that WWA4 (World Wrestling Alliance 4) school in Atlanta, Georgia, was where he could go to start training in pro wrestling in America.  So at the age of 21, Pavel moved to the USA, and began training at WWA4.  The head trainer at WWA4 was “Total Protection” Mr. Hughes, a former WWF/WCW/NWA wrestler.  Mr. Hughes and Elix Skipper (WCW/TNA superstar) were his trainers, and Pavel was soon experiencing his first independent wrestling matches in Georgia and North Carolina.

After a year-and-a-half of training in Atlanta, Pavel was ready to expand his wrestling knowledge and move to Orlando, Florida, where he would join the Team 3D Academy of Professional Wrestling.  Under the continuous personal guidance of the Team 3D trainers Bubba and Devon Dudley, muscular endurance coach and a creator of the “American Gladiators” show “Apache” Dann Carr, Pavel would truly become the professional wrestler he had dreamed of becoming.  The experience shaped him physically and emotionally, building character and priceless wrestling knowledge.

The persona of Victor Romanoff, the “bad guy” Russian from Siberia, was created with the Team 3D Academy.  From a little kid from Russia, athletic but not looking like “those guys from TV,” Pavel now began becoming one of those bigger-than-life characters.  He has a presence, a personality, and a look that commands people’s attention.  It took him years to grow and build himself, completely changing his appearance and style.  Now, as he walks down a city street, people stop and ask him whether he is an MMA or WWE fighter, or if he is famous in some other way.

After Team 3D, Pavel wrestled around the country, and he went to Europe and conducted seminars in Russia when he visited his hometown in 2014.  Giving back has always been important to Pavel.

In 2015, Pavel had his first try out matches in Impact Wrestling at Universal Studios and in WWE, on Monday night RAW and Smack Down in Amway Arena in Orlando.  The Siberian Fighting Spirit has made it into American Professional Wrestling, and he is grateful and humble for all the opportunities he has had and all the support people have given him to pursue a career in the sport he loves.

Wrestling for many years, Pavel has gained knowledge and advice from such great minds in the pro wrestling business as William Regal, Goldust, Tommy Dreamer, George South as well as Bubba and Devon Dudley, and many many more who have helped make him the wrestler he is today.  He intends to continue growing, reaching for greater and greater success within the wrestling world – and other worlds too.

Pavel is an exceptional individual who has used his “Siberian Fighting Spirit,” fighting for everything he has accomplished in life, while always retaining his authenticity.  Pavel Kozlov, a.k.a. Victor Romanoff, is the real Russian of professional wrestling, with a persona, experience, training, and personality that turn people’s heads; and he uses all his attributes in everything he pursues, whether in his professional wrestling career or in his other careers and hobbies, which now include acting and business as well. 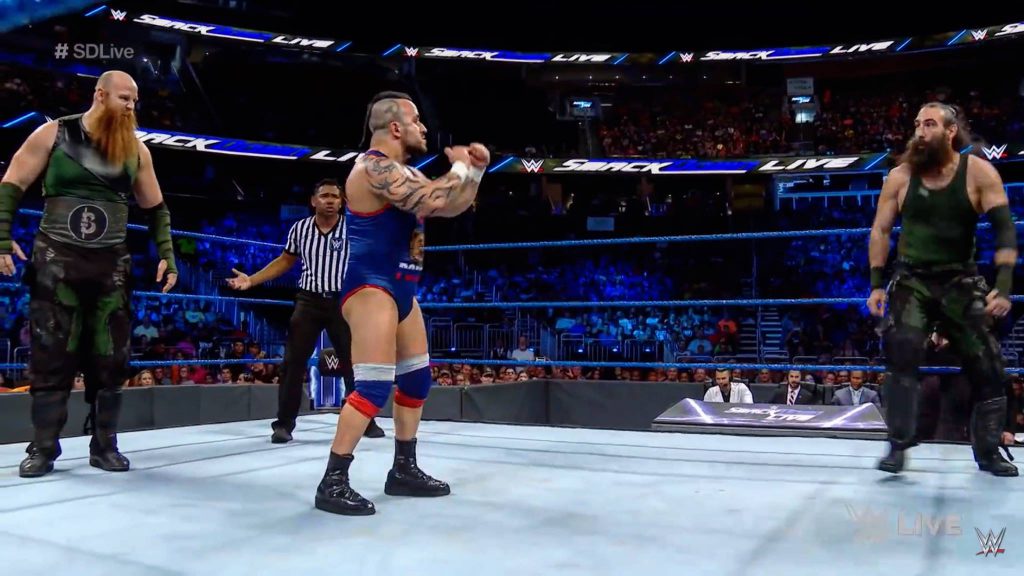